Revealed: The filthiest UK festivals and where to go to get the most (and least) sleep

We all know that UK festivals can become mud baths thanks to the great British weather and attendees aren’t exactly guaranteed a lie in – but which festival is the dirtiest UK festival, and which is the worst for getting the least sleep?

As the festival season approaches, SpaSeekers reveal the festival where people shower the least, brush their teeth the least and even change their underwear the least. The nationwide survey of 500 festival goers also ranks the festivals by sleep – how many hours kip do you get at Creamfields in comparison to Bestival?

Download Festival has been named the dirtiest festival in the UK, according to new research conducted by SpaSeekers.

Annually hosted at Donnington Park, Download festival is the music festival for rock lovers across the UK, and SpaSeekers research has revealed that it is the festival that people clean themselves the LEAST.

SpaSeekers surveyed 500 British festival goers on their basic hygiene habits at festivals including whether they shower, change their underwear, and brush their teeth.

The data revealed that 40% of Download festival goers do not shower at all across the whole weekend, 48% say they do not wash their hair, and 1 in 10 don’t even brush their teeth.

However, Reading and Leeds festival goers are the worst for not showering – 42% confessed to going the whole weekend without freshening up. Creamfields goers are the worst for not changing their underwear with 13% of them confessing to keeping the same dirty pair on across the whole weekend, as did 13% of BBC Big weekend attendees and 12% of Download Festival partygoers.

Latitude came out as the festival where attendees are the cleanest.

SpaSeekers have ranked the festivals from least to most clean in a table of the top 10:

Brits are getting no sleep at Bestival

UK festival goers are known for partying all day and night, so which is the best festival to attend for those who are wanting a few hours kip? 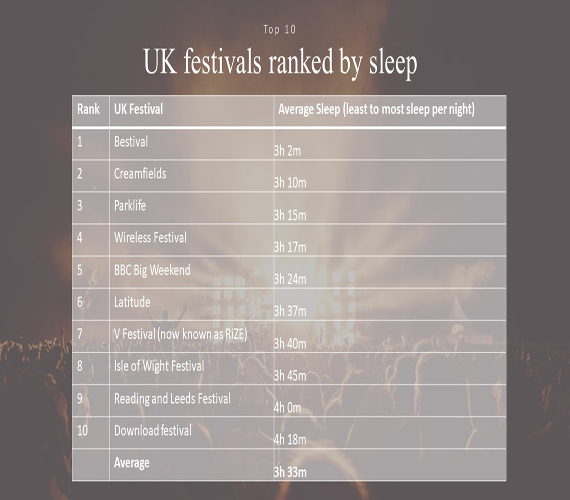 The study showed that despite their love for loud rock music, it is actually Download festival goers who get the most sleep during the festival weekend, getting an average of 4 hours and 18 minutes sleep each night.

Reading and Leeds Festival and Isle of Wight Festival are also top festivals for getting sleep with festival attendees getting four hours and three hours and forty-five minutes of shut-eye each night respectively.

Despite getting very little sleep and many not even showering, the study reveals that Brits are still pulling whilst at a festival. Festival goers who attended Bestival admitted to having sex with on average 2 people over the festival weekend, while those who attend Reading and Leeds Fest do not pull anyone.

Festival goers attending Parklife are most likely to kiss someone, kissing on average 2.17 people over the weekend, followed by the 2.11 people kissed at wireless festival.

“Attending a festival weekend is a rite of passage every Brit goes through, and while people will be having the time of their lives watching their favourite musicians our research showed they are prepared to get a little dirty and sacrifice some sleep.

“We were surprised to discover that Download Festival is where Brits are getting the most sleep, while festival goers at Bestival will be feeling a bit sleep deprived getting just over three hours of sleep a night!

“Whether Brits are going to enjoy rock at Download or dance music at Creamfields, what really matters is that Brits enjoy the amazing festival atmosphere and have a great weekend.”