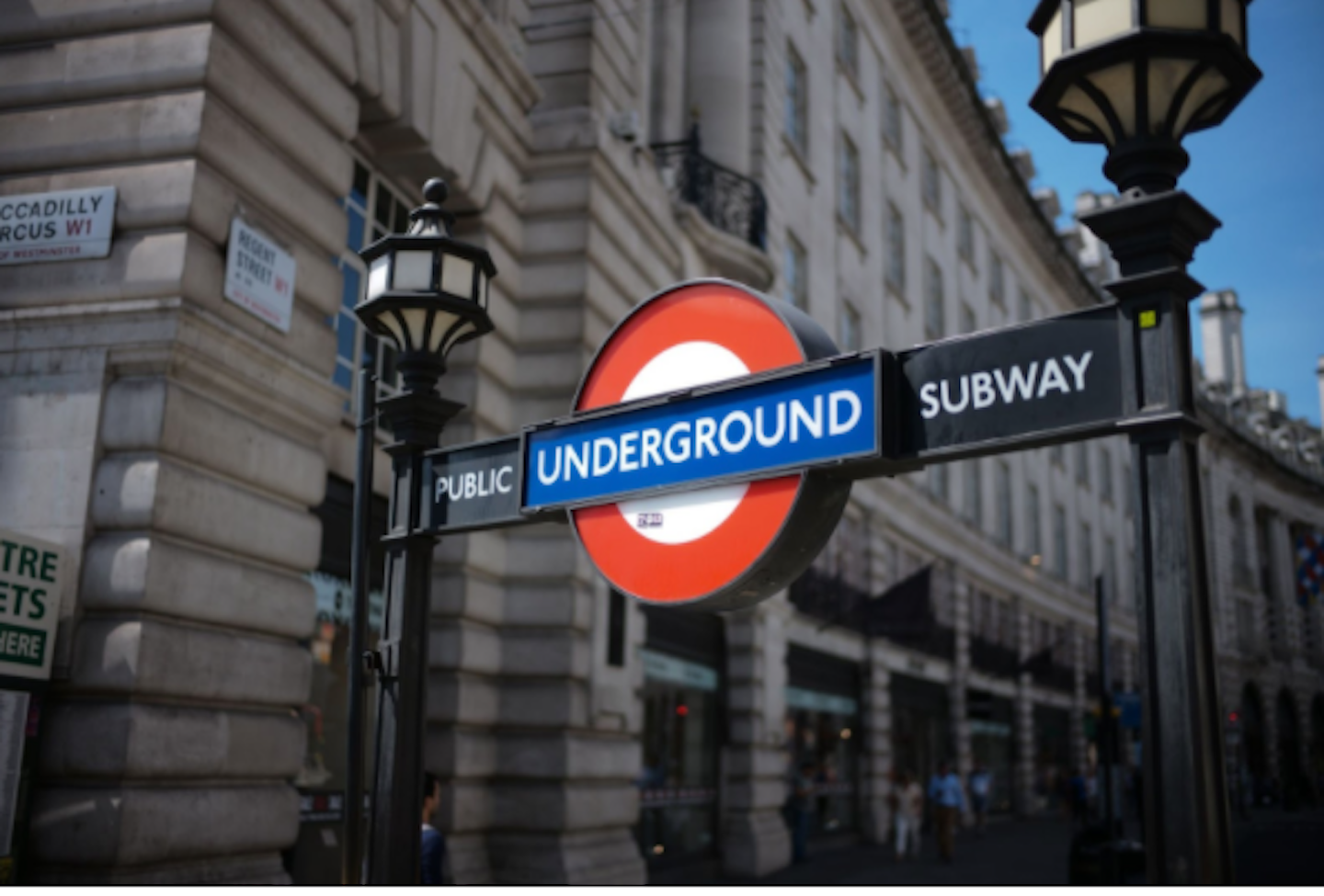 The Worst Tube Lines For Your Skin

A ride on the Tube is a daily event for people working and living in London. It’s as much a part of their morning ritual as breakfast or a skincare routine. However, a trip on the Tube can actually be harmful to your skin, exposing it to bacteria and pollution.

With more of us starting to commute again after months of working from home, we’ve put together this guide to the best and worst Tube lines for your skin.

Looking at factors such as the presence of bacteria, pollution levels, carriage temperature, humidity, the length of the line and the number of weekly riders, we ranked all eleven of London’s Tube lines from worst to the best.

The worst Tube lines for your skin 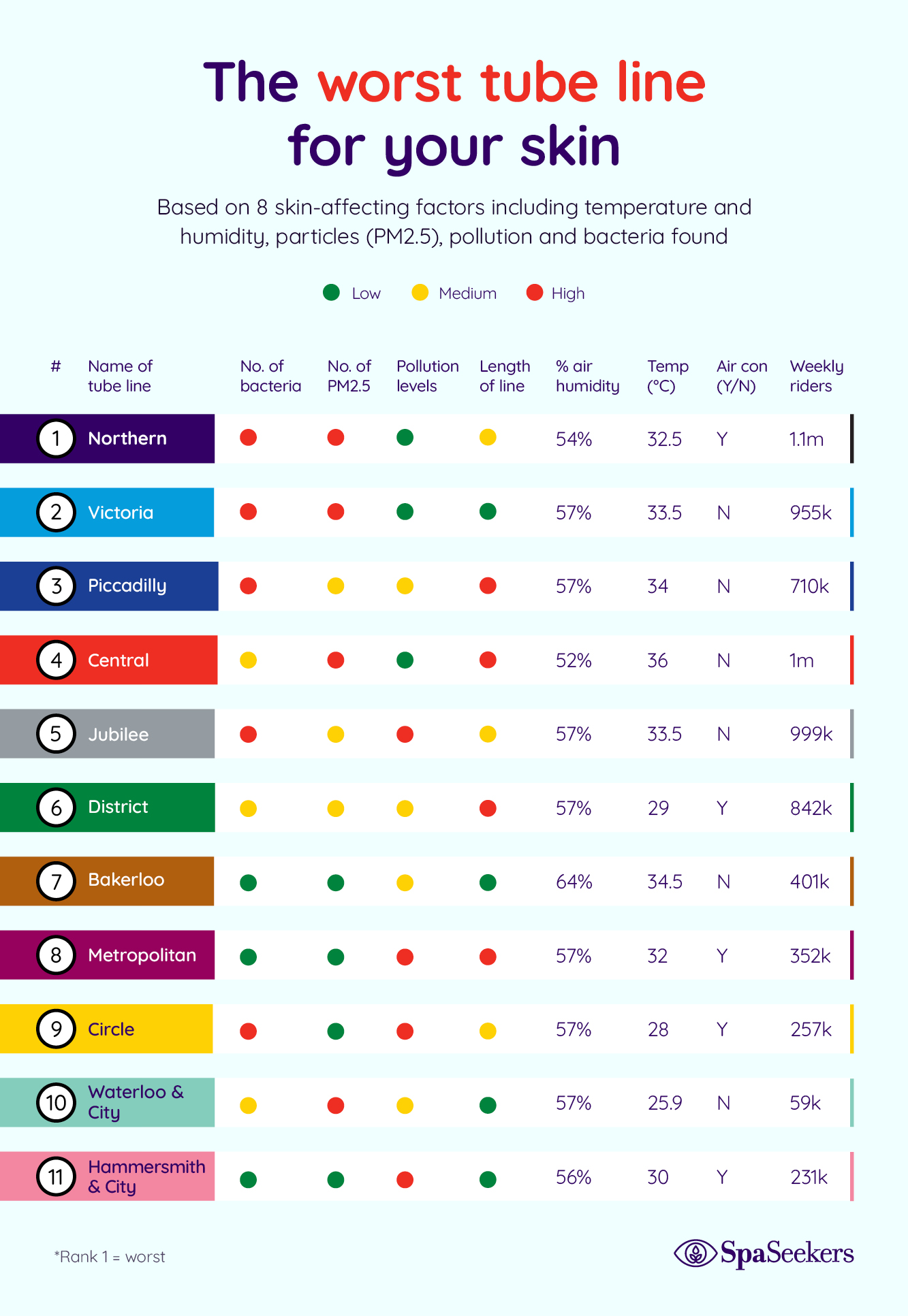 Our study found that the Northern line is the worst Tube line for your skin - bad news for its 1.1 million weekly riders. With the highest number of weekly passengers, the Northern Line exposes riders to pollution levels six times above the World Health Organisation (WHO) limit.

Unsurprisingly, such high levels of airborne pollutants can leave a lasting impact on the skin and even cause skin conditions such as eczema, dermatitis and psoriasis.

The Victoria Line is teeming with bacteria, having the highest number of germs of all the Tube lines. Touching your face after coming into contact with dirty seats and handles can transfer a whole host of blemish-causing bacteria.  Something to avoid for those wanting smooth skin and a clear complexion. 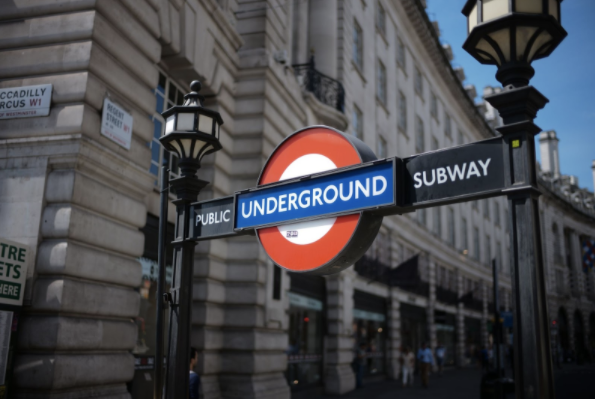 The 710,647 weekly commuters on the Piccadilly Line can expect to travel on one of the hottest Tube lines in London. Despite the 34°c heat, Piccadilly is one of six Tube lines without aircon.

With hot temperatures leading to sweating, the body can become dehydrated, which causes dryness and irritation to the skin.

With pollution levels eight times above the recommended WHO limit, the Central Line is the most polluted London Tube line.

Accelerated signs of ageing, inflammation, acne and a wide range of skin conditions have all been linked to exposure to airborne pollutants.

At 46 miles, the Central Line is also the longest London Tube line meaning passengers risk being over-exposed to the harmful pollution levels, increasing the chance of side effects to the skin. 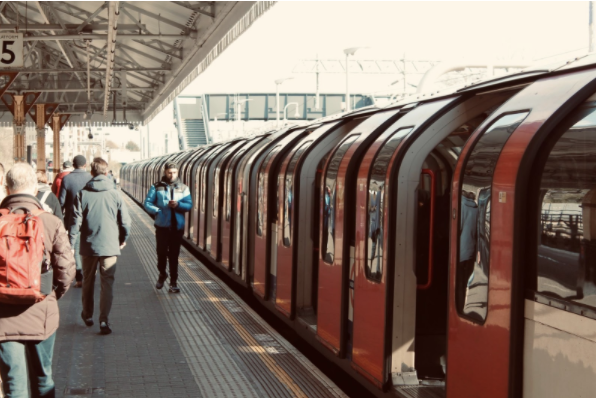 With 999,561 weekly passengers, Jubilee is the third-busiest Tube line in London. With all those bodies crammed together in the carriages, it’s little wonder that Jubilee’s humidity levels are one of the highest at 57%. High levels of humidity can cause breakouts, sweating and rashes. 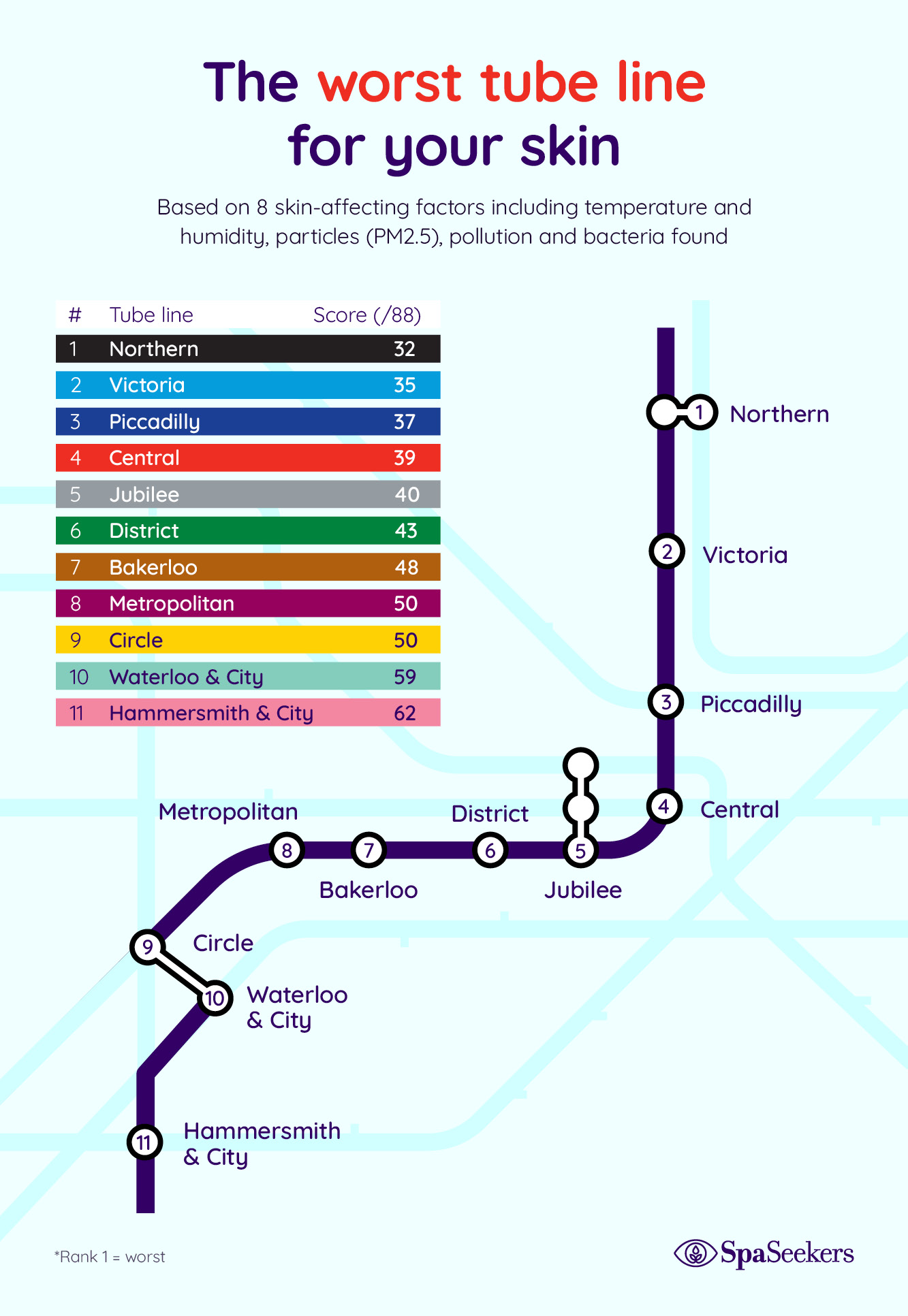 The most low-risk tube lines for your skin

We found that the Hammersmith & City Line is the best London Tube line for your skin. With only 231,193 weekly riders, the line is one of the least crowded.

It also has some of the lowest levels of bacteria out of the eleven Tube lines, reducing the risk of blemish-causing bacteria finding its way onto the faces of passengers.

At only 1.5 miles, the Waterloo & City Line is the shortest length, heavily reducing passengers’ risk of coming into contact with airborne pollutants or bacteria. It’s also the least busy, with only 59,492 weekly passengers.

At 28°C, Circle has one of the lowest carriage temperatures. A cooler climate, it won’t cause irritation or sweating, which can dehydrate the skin and cause redness.

The Circle Line also has the lowest level of PM2.5, small particles of pollution which can irritate the eyes, nose and respiratory system. Various studies have shown that these particles can have a number of negative effects on the skin. 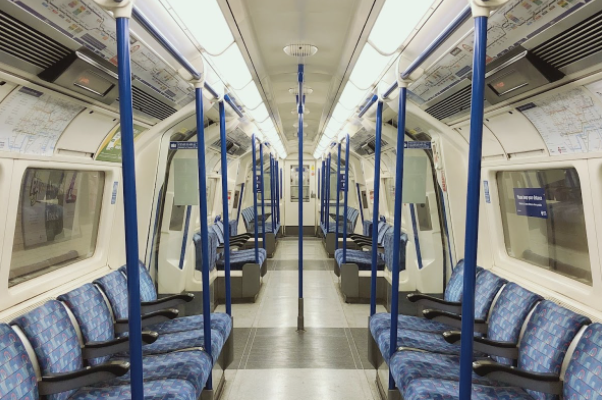 Our study showed that the Metropolitan is the cleanest Tube line in London. With the lowest levels of bacteria, passengers have a much smaller chance of coming into contact with germs that cause skin infections and other illnesses.

With a length of only 14.5 miles, the Bakerloo Line is one of the shortest Tube lines in London. Travelling such a short distance means passengers are less likely to be impacted by levels of pollution or bacteria.

The District Line has relatively low levels of pollution for a London Tube line, at twice the WHO limit. This significantly reduces the chance of pollutants clogging pores and causing long-lasting effects such as premature signs of ageing.

How to protect your skin from your commute

With our research showing that your daily commute could be damaging your skin, what steps can you take to ensure you give your skin the best chance?

1. Double cleanse - When you get home from work, relieve the stresses of the day and take off your makeup firstly using an oil based cleanser or balm. This step will ensure there isn’t a single bit of makeup left on your face. Then, use a water based cleanser to deep clean the skin and thoroughly remove any build up and pollution.

2. Wash your hands - We’ve all got used to washing our hands on the regular. Ensure that before you touch your face after your commute you give your hands a wash using an antibacterial soap.

Embark on your own skin journey with SpaSeekers

Worried that your commute may be causing chaos with your complexion? Book a visit to your nearest London spa for a professional facial and relaxation session.

We pulled data on multiple metrics that can contribute to bad skin when in the outdoors and on the Tube. We looked into things such as bacteria, pollution and temperature. Once ranking these, we created an overall rank for the 11 tube lines to gain an understanding of the best and worst lines for skin. We used averages across the lines for an overall PM2.5 for each underground, whilst also using an average of surrounding stations for Waterloo pollution.